As a non-German speaker living in Switzerland, I often need to quickly translate large texts, but I get annoyed by character limits on Google Translate or DeepL. Learning German may have been a way better call, but instead I decided to deploy a translation application. It’s made of 3 containerized microservices:

In this post, we build the containers. In part 2/3, we’ll deploy the app on a single node with Docker Compose. Finally, the app will be deployed on a Kubernetes cluster in part 3/3.

2) High-level overview of the app 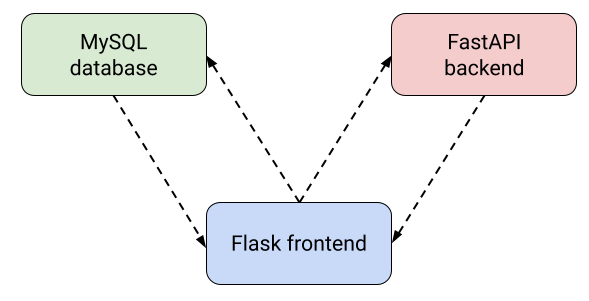 The first step is to build each microservice directly on our machine, without thinking about Docker. I use a virtual environment for each component (I like Python’s standard venv). This is much more convenient during the development phase since there is no need to rebuild a container every time something changes. In the meantime, I am in control of the modules/python version each microservice needs to work properly.

Below is the venv syntax to create a virtual environment named .venv:

During this phase, I use the local network to connect the microservices together. I directly hardcode the URLs (like http://localhost:80/) in the components so they can talk to each other.

In this case, we have to write the Flask frontend and the FastAPI backend. For the MySQL database, we’ll use the official container as is.

Once the app works on a local machine, we can start to build container images.

How to Dockerize a microservice

My method is as follows:

I’ve seen people using pip freeze > requirements.txt but I prefer to avoid this because it lists every single module in your environment. This includes potentially unnecessary modules that you might have tried during development, or dependencies that do not need to be explicitly listed. So, I manually list the packages I actually import in my scripts: the requirements.txt file is much shorter and readable this way. There is actually a module called pipreqs to automate this process.

With the above steps completed, it is now pretty straightforward to write the Dockerfile. Check out the source for the Flask frontend image or the FastAPI backend image. Let’s look at the backend’s Dockerfile in detail:

In order to translate with no character limit, the FastAPI backend works as follows:

We decompose the work this way because transformers models cannot process long text: they usually take no more than 512 or 1024 words/tokens at a time.

We could put these models in the source code of the Docker image along with the .py scripts, but instead we pull them at image build: through the requirements.txt file for the Spacy model and through the pull_nlp_models.py script for the translation model. We proceed this way for several reasons:

Overall, the point is to keep the source code of a Docker image as light and simple as possible.

The point of containers is that they can run anywhere, be it someone’s local machine, a server or a Kubernetes cluster. So they have to be accessible from anywhere. This is exactly the point of a container registry. The syntax is as follows:

For the translation project, the Docker images live on my personal DockerHub account. When we deploy the app later on, the images will be pulled from there to run the containers.

It actually gets even better than that. If you look at our FastAPI backend image for instance: 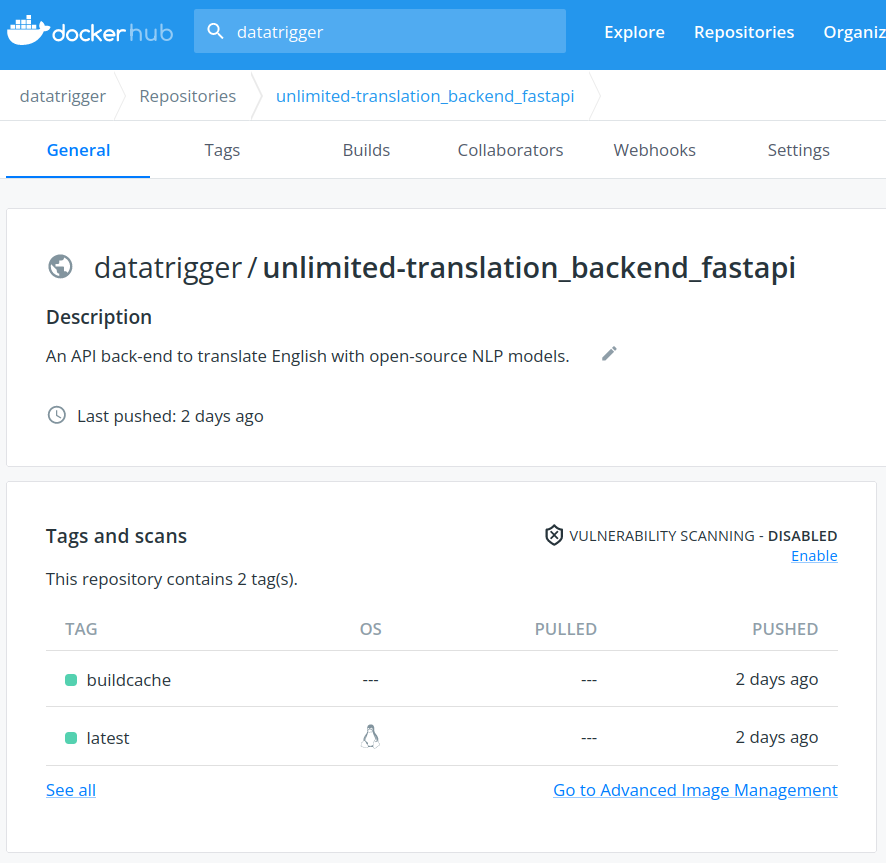 latest is the tag of the actual image of the container. What about buildcache? GitHub Actions looks at this file to know which parts of the image are impacted by the latest changes pushed to the source repository. This allows not to re-build the entire image at each push, but just the impacted layers. This saves a huge amount of time, especially with heavy images like the FastAPI backend (2+ Go) with heavy ML models embedded in it.

After developing and testing our microservices locally, we built container images and pushed them to a registry in a CI/CD framework. We can now easily maintain them and pull them from anywhere for deployment. Let’s see how that goes in the next post.